Poetry is often inspired by art, and poems inspire art in turn. This series of posts celebrates this special connection in the words of artists and poets who have been published by Two Rivers Press.

The germ of this sonnet came from an anecdote about Picasso. In 1939 he was walking in Paris in with Gertrude Stein when they saw a camouflaged truck for the first time, and were amazed by it visually. After it had passed Picasso is said to have turned to his friend and fellow modernist and said: ‘we did that’.

I suppose he saw some kind of relation between the flat fragmented forms of both his Cubism and her prose on the one hand, and the new techniques of war on the other. That got me going, and as I tried to describe the moment two other modernist paintings came to mind: Kasimir Malevich’s White Cross on a White ground, and le Douanier Rousseau’s ‘Tiger in a Tropical Storm’. Suddenly I had a poem!

Conor Carville is a poet and critic from Armagh, N. Ireland. Camouflage appears in his collection English Martyrs, published by Two Rivers Press in 2019. He lives in South London with his wife and daughter.

Conor Carville was born in Armagh city in Northern Ireland. He went to school at St Patrick’s Grammar School, where the poets John Montague and Paul Muldoon were also educated. After that he studied Law at Trinity College, Dublin. On graduation he moved to London, where he worked as a solicitor in a legal aid practice in Tottenham. In the mid-1990s he left the law and took an MA in English Literature at Goldsmiths’ College and then enrolled as a PhD student at Oxford, under the supervision of Terry Eagleton. While at Oxford he won the Friends Provident National Poetry Prize for an unpublished poet. In 2007 he won the Patrick Kavanagh poetry prize. His PhD was published as The Ends of Ireland in 2012, and his first collection of poems, Harm’s Way, came out from Dedalus the following year. Samuel Beckett and the Visual Arts appeared in 2018 from Cambridge University Press. A second collection, English Martyrs, is published by Two Rivers Press.

I began what eventually became ‘Bless’, the sequences that closes English Martyrs, in the winter of 2013, just after my first collection was published. That book, Harm’s Way, includes poems written fifteen years before. This time, I thought – hoped – things would go more quickly.

We’d just moved to a new house in South-West London, after ten years living in Elephant and Castle, near the English Martyrs church, after which my second collection is named. The title poem, set in that church, describing its odd wooden sculptures of Thomas Campion, Oliver Plunkett and other saints, was written just before we left, as were most of the other poems in the first part of the book.

After the move I would write very early in the morning. There was a little nook in the eaves, below a window looking North towards Wimbledon Common, about four miles away, though all I could see were TV aerials and chimneys, and the steadily lightening sky. I’d recently read an interview with Toni Morrison, where she’d talked about starting to write in the darkness before dawn, and watching the sun come up as she did. I liked that idea. And I also remembered how John Montague had told me he wrote immediately after waking, to be closer to the dream-life. But the routines of parenting were also a factor: our daughter had started to sleep a little later in the morning. I, however, was still waking up at five.

So it was here I got going with ‘Bless’. The initial line of the first poem in the sequence was the first thing I wrote. It came out of nowhere but caught a mood that I wanted to pursue. It’s a cannibalization of the first line of the film Apocalypse Now, ‘Saigon, shit, I’m still only in Saigon’, with Wimbledon substituting for the Vietnamese capital.

Francis Ford Coppola’s movie was one I’d watched endlessly on video in a shed in an Armagh back-garden in the early 1980s. Like most of my friends I was obsessed with it: the images, the dialogue, the music. The violence. But for me there was something else too – as the camera tracked across the bookshelf in Kurtz’s bivouac, I was introduced to literary modernism: Conrad’s Heart of Darkness and Eliot’s The Waste Land. Even now I can’t think of Kurtz without seeing Brando’s oily dome, and when I read Eliot’s lines about Stetson, I think of a bare-chested Robert Duvall in a cowboy hat.

So it seemed a perfectly reasonable idea to begin a long poem, set in suburban London, based on that hallucinatory cinematic epic. It gave me a kind of template that would, I hoped, enable me to write fast and without too much self-consciousness. And so it proved, the poems coming very quickly, often one a day, riffing on scenes from the film, or characters, or some of the themes and motifs that Coppola nicked from Eliot and Eliot from Conrad, Wagner and so many others. Against these I shored my own fragments, especially the myths and totems of my childhood: The Wombles, Bagpuss, The Moomins. By the time I had got to about fifteen poems there existed a kind of molten, slow-moving churn that went on perpetually up in the eaves, attracting all sorts of crap and debris into it, even while I was not at my desk. Holderlin and Axl Rose. Karl Schmitt and Jimmy Savile.

And yet, were I to describe what I had at this point as ‘poems’, I’m stretching the term considerably. They weren’t really poems. Not yet. They were sallies, rushes, convulsions. The main thing was that all together they seemed to be adding up to a world that was sufficiently distinct from, yet familiar to, my own, that I was eager to return to it every morning. In the end it took another five years, on and off (mostly off), to revise, edit and organise the sequence into a finished state. So it wasn’t as speedy as I hoped it would be, and I wrote many poems that didn’t make it into the finished sequence. I publish one of them here for the first time.

Wimbledon, shit … I’m still only in Wimbledon,
and here’s you seated on the sofa growing
stronger by the second. Nowadays
the slice-and-dice of rotors overhead betokens

not the smoking-out of a crack-house, or a Wessex
fossicking its way across the drumlins,
but the Bells or Sikorskis that bring
oligarchs to Chelsea in the Spring. Bless.

Bless them all: Camberwell and Peckham Road.
The South London Press and its small-
ads for jumble. A black Gola hold-all
dispatched one October from Aldergrove,

accompanied by its callow minder, me:
the hold-all that held all: a change of clothes,
a duty-free carton of Embassy Regal,
and my extensive travelling library

of one book, a 21st present that July:
the orange-spined, white covered edition
of Gunter Grass’s The Tin Drum,
largely unread, even today.

And the black yachts shining
on the Riva Ca di Dio.
Or the Coppermill
on Cheshire Street

where Paul McCarthy unleashed
his Dionysian buccaneers,
that bunch of freaks
with their latex masks and makitas

and merkins and codpieces
who clubbed me to the deck
with a jeroboam of mayonnaise
then shot me in the head.

We woke up deep underground
in the tenth and final circle
of the EuroDisney queue
for Pirates of the Congo,

to find a couple of cowboys
spearing bales of hydroponic
with their sizzling tridents,
then shaking them into the bolgia

as if forking straw into a trough.
That snow of burning seeds and pods
strafed our skin like glitterball reflections
and we joined the others in their laughing dance. 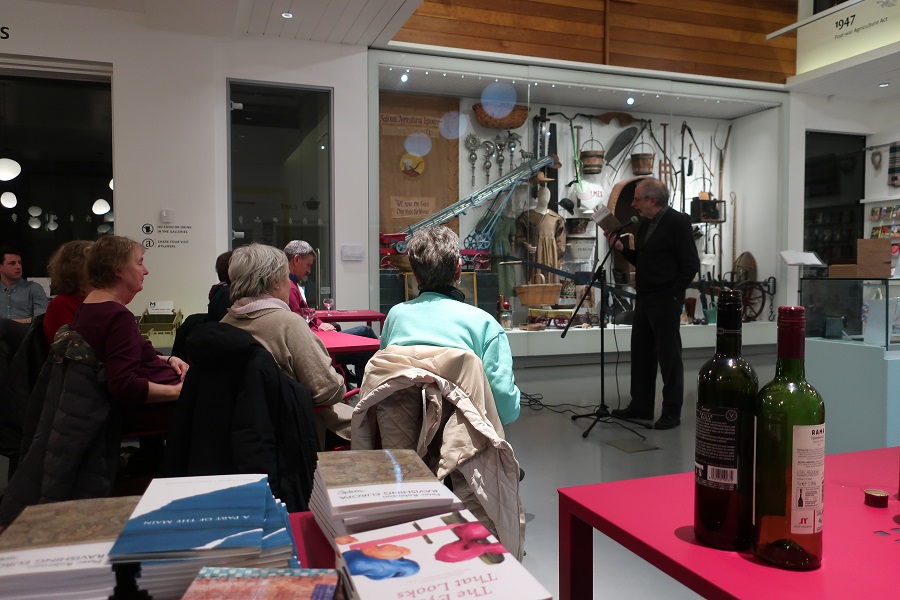